Beverages Gratitude's for guide and driver Admission to Topkapi palace, Harem section is not included

Blue Mosque will be visited from outside on Friday mornings until 13:00 because of noon-pray. Grand Bazaar is closed on Sundays; we give free time around bazaar on regular basis and we replace it with Egyptian Bazaar, used as the spice market since 1665, on private basis. Correct dress code required to access for Blue Mosque and Rustem Pasha Mosque Summer: Light comfortable clothing and shoes. Sunglasses, suncream, hat and camera. Winter : Warm casual, comfortables shoes, sunglasses, hat and camera.

Guests must be ready at the lobby area of their hotel at 08:00-08:30am. Exact time to be advised up confirmation

We will start our Istanbul tour of the Sultanahmet historical district for a first impression of the gorgeous mosques, palaces and assorted historical oddments that make up this ancient walled capital.

First we visit the Hippodrome, center of Byzantium’s life for over 1000 years, holding 100,000 spectators and featured objects from all corners of the empire.

We proceed to the Blue Mosque, the last of Istanbul’s magnificent imperial mosques, named for the beautiful blue Iznik tiles that cover its walls. Built by Sultan Ahmet I in the early 17th century and designed by a pupil of Sinan, the greatest of Ottoman architects, it is the only imperial mosque with six minarets.

Hagia Sophia, the world’s oldest Byzantine basilica, dedicated by Emperor Justinian in 537 A.D. and then converted to a mosque during the Ottoman Empire. See the beautiful mosaics on display at the museum.

Enjoy free time to explore the exhilarating Grand Bazaar. It was the commercial heart of the old city and its 4,000 shops are full of treasures including carpets and kilims, silks, jewelry, ceramics, icons, and leather goods.

Afternoon we visit Topkapi Palace. This former residence of the Ottoman Sultans houses a fine exhibition of porcelain, jewelry, silverware, glassware, clocks and Ottoman weaponry, royal treasures and was once the home to the world’s largest harem.

We visit the Rustem Pasha Mosque, completed in 1563. A masterpiece designed by Sinan the Magnificent, it has the most exquisite and extensive Iznik tile decoration of any mosque in Istanbul. The large quantities of exquisite Iznik tiles, arranged in a wide variety of beautiful floral and geometric designs, as well as the spacious central courtyard, make this mosque a must-see Istanbul attraction. 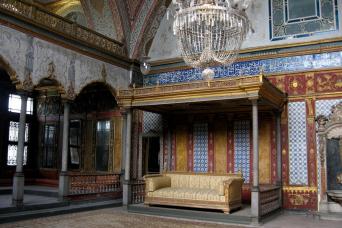 Private tour of Old City, visiting the main Byzantine and Ottoman sites in...